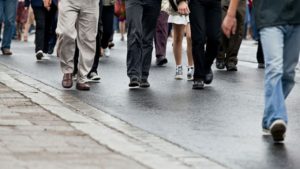 Please see below the Springboard UK retail footfall figures for the month of November. The key points are;

·         Greater London recorded a slight decline of 0.1%, a deceleration compared to last year’s decrease of 0.8%; however, this is the fifth month of consecutive decline. The only shopping location to show positive growth for this region was the High Street.

·         The East continues to outperform all other regions, now celebrating 12 months of consecutive growth, and remains consistently above the UK average.

·         East Midlands High Street Footfall saw a return to growth of 1.7, bringing an end to the previous 8 months of consecutive decline.

·         Of the three shopping locations, Shopping Centres were the poorest performers, growing in South West and Wales only. High Street showed positive growth for all but three regions: Greater London, Northern Ireland and South West. Retail Parks continued to show growth, however at a decelerated rate 0.3% (3-month rolling average) compared to 1.8% six months ago.