These figures again show that our footfall levels are nearly 20% below the same week last year and nearly 7% down on the previous week. Week 38 begins on the 18th September.

Clearly Dartmouth needs to respond to this challenge, at a time when the strength of the Euro means many people are holidaying in the UK. Tourist destinations are benefiting throughout the UK but we are not getting the attention we deserve. We all know Dartmouth is one of the nicest most friendly destinations in the UK with a fantastic offer for holiday makers but that is not reflected in the numbers of visitors we have at the moment.

How do we respond to this challenge?

Who will take responsibility to act?

Where will the funding come from?

All these questions need to be answered but DB News cannot see anyone taking that responsibility.

The VisitBritain forecast for the volume and value of inbound tourism is issued in December each year. The below forecast is our mid-year update run in July 2017. 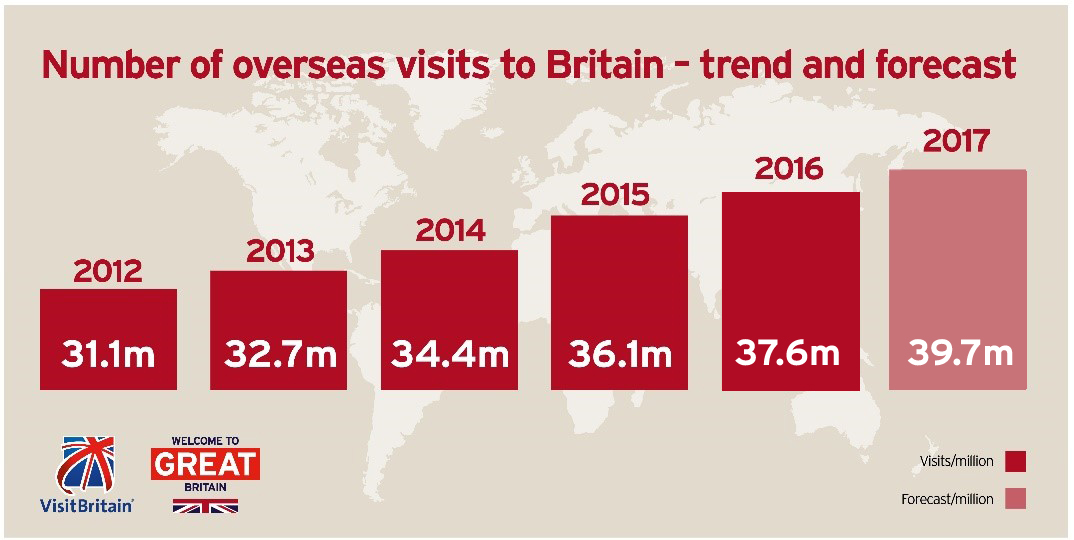 This forecast was run in July 2017, at which point provisional inbound data to May 2017 was available from the International Passenger Survey, and represents an upgrade to the forecast released by VisitBritain in December 2016.

The forecast of a 6% increase in inbound visits is a slightly faster rate of growth than that seen in the last several years and, if realised, would be the fastest since 2006.

A 14% growth in inbound spending would again be faster than that seen in the last few years and faster than the long term average although not unprecedented (a similar rate of growth was seen in 2013). The visits and growth forecasts imply an 8% increase in spend per visit.

We have identified a number of risks and assumptions when making our forecast and have briefly detailed some of these below. Two specific uncertainties to note are currency and security fears.

The pound remains much lower than its pre-referendum level and is forecast to continue to be weak in the short term, although the path of the exchange rate throughout the remainder of 2017 is a source of uncertainty in the forecast.

VisitBritain research conducted in July 2016 found that the prevailing exchange rate was likely to act as a net incentive for potential leisure visitors to come to Britain with the benefit concentrated amongst those who have visited Britain before and those with a good knowledge of the exchange rate. Provisional data for 2017 to date suggests that in addition to an increase in visit numbers, average spend per visit is up on 2016, driven at least in part by especially strong growth in visits for long-haul markets, who tend to stay longer and spend more.

The global macroeconomic outlook is generally benign and stable in most of Britain’s key inbound markets in 2017 and this is forecast to remain so for the rest of the year.